As a rare account by a woman and a Loyalist during the French and Patriot attack on British forces at Newport in September 1778, Mrs. Almy’s account provides valuable insights into a civilian woman’s reactions to the war and to the situation in Newport. Among many other things, she graphically describes her attempts to protect her children as the French naval squadron under the Comte d’Estaing fought its way in and out of Narragansett Bay during the Battle of Rhode Island. 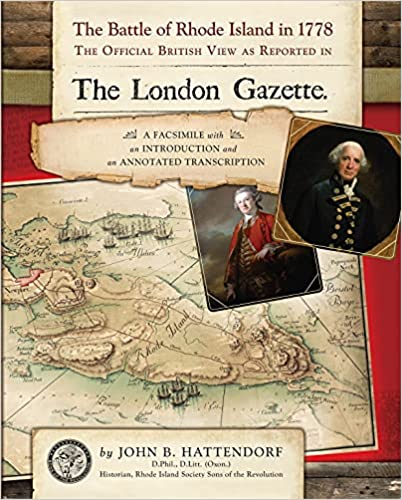 During the War for American Independence, military and naval operations had been in progress for more than two years when the 1778 Rhode Island Campaign occurred. This volume presents an introduction and annotated transcript of the official British reports of battle as they appeared in the British government’s official publication, The London Gazette. The naval aspects of the confrontation are reported in great detail giving readers on\-the\-scene information as well as perspectives of larger operational concerns. Included in the work is a facsimile of reports from the Gazette.\n\nAbout the Editor\nProfessor John B. Hattendorf, D.Phil., D.Litt., University of Oxford, is senior advisor at the U.S. Naval War College’s eponymous John B. Hattendorf Center for Maritime Historical Research and Ernest J. King Professor Emeritus of Maritime History. Additionally, he is the Historian of the Rhode Island Society Sons of the Revolution serves as Historian of the Rhode Island Society of Colonial Wars and Rhode Island Society of the Cincinnati. He is the author, co\-author, editor, or co\-editor of more than fifty volumes, including the four\-volume Oxford Encyclopedia of Maritime History (2007).